Analyse
French Cup
Posted by
OM.fr
Partager le contenu
copy url
Olympique de Marseille were eliminated from the French Cup after being beaten by OL at the Groupama Stadium after a late Aouar goal despite Pele saving a penalty.

A T-SHIRT FOR THE SUPPORTERS

The Olympien fans were banned from travelling to Décines-Charpieu for the French Cup match, so they stayed home on Wednesday evening. The Marseille players were keen to send a message to their loyal fans, who usually follow them everywhere. They warmed up with a t-shirt that read "Supporters present". 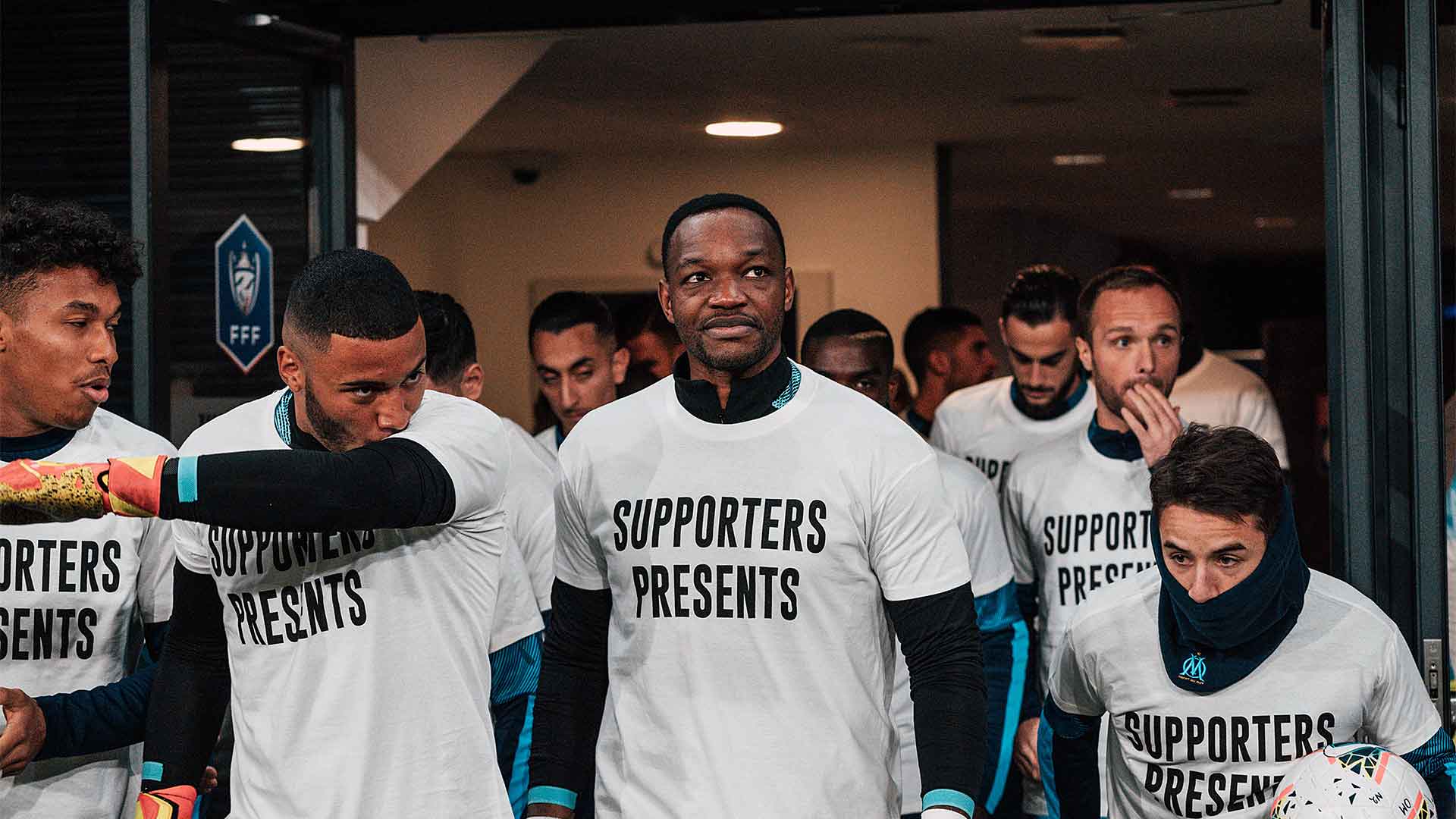 Two injured, Benedetto and Radonjic, and two suspended, Amavi and Caleta-Car. André Villas-Boas has put together a team with changes from his last starting eleven. First of all, Pele was in goal in place of Mandanda. Sakai replaced Amavi and Kamara came down in the centre hinge, replaced as a defensive midfielder by Strootman. Rongier found his place in the midfield and Lopez, who started in midfield against Toulouse, moved up a notch on the same side.

There were no real chances for either side in the first half, which was dominated in terms of possession by Lyon. There were three chances for Marseille through Payet, Rongier and Strootman, who struck the only shot on target in the first 45 minutes as Lyon, although they had some dangerous moves, failed to make a shot on target.
Sanson and Strootman took a yellow card. The Dutchman, in danger before kick-off, will be suspended for the Nantes game on 22 February at 17.30. 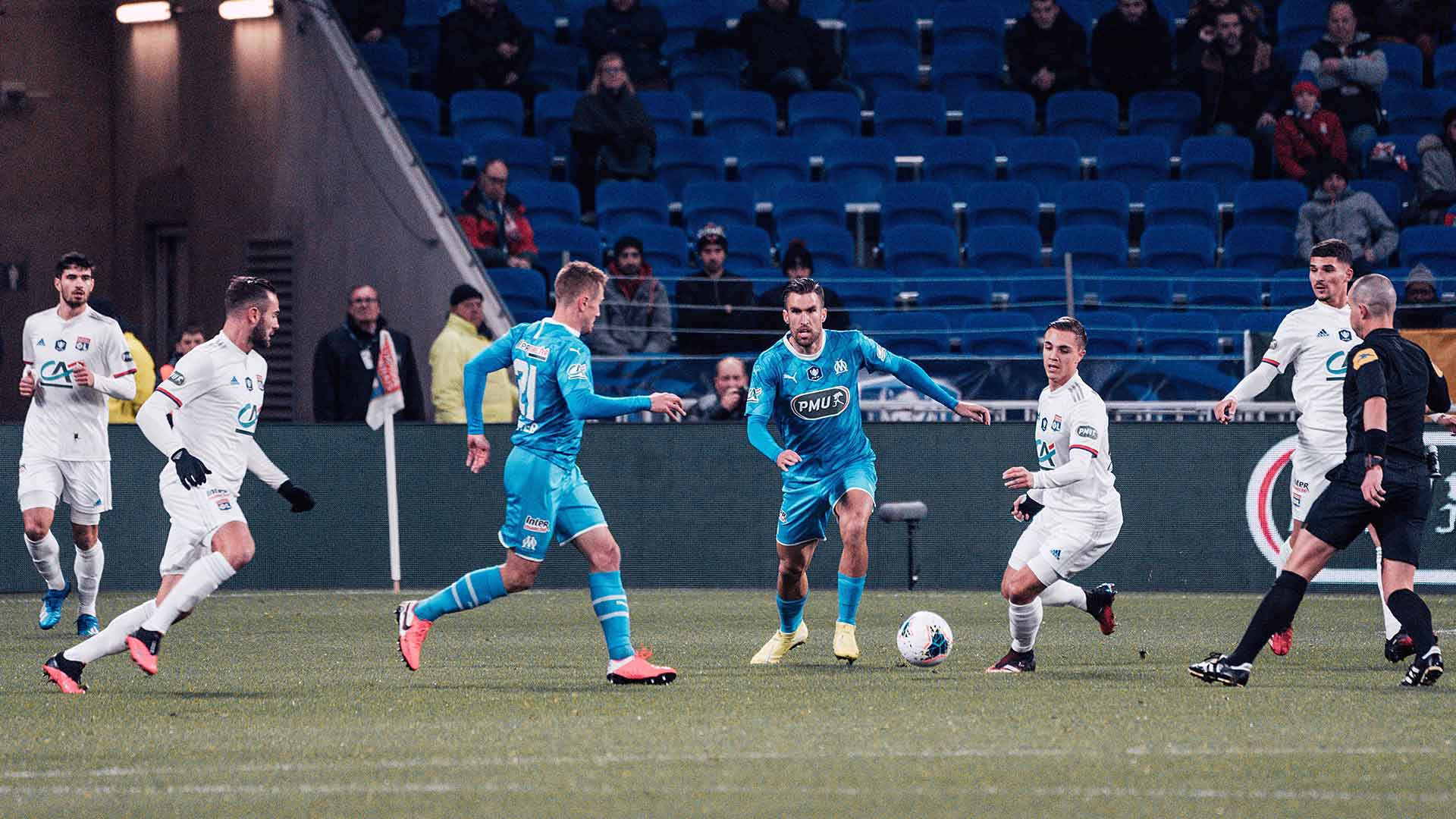 Pelé STOPS A PENALTY BUT....

After the half, the pace of the game did not increase and there were no more chances. A shot from Toko Ekambi hit Sakai's hand in a Lyon move. After VAR, Benoît Millot awarded a penalty. Pelé repelled Dembélé's shot and lived up to his reputation as a specialist in penalty saves!
Unfortunately, a few minutes later, Payet stayed on the ground and asked to be substituted. The number 10 left the field holding the back of his left thigh. Aké took his place and Sarr inherited the captain's armband.
In the 81st minute, on a Lyon counterattack, Toko Ekambi crossed from the edge of the area after Traore's pass, and the ball went to Aouar who fired a powerful shot and opened the scoring.

ALL FOR THE LEAGUE

Having been eliminated from the French Cup, the Olympians must now focus on the Ligue 1 Conforama. Second with 49 points and 8 points clear of third-placed Rennes, OM have all the cards in hand to finish on the podium and secure a place in the Champions League next season.
On Sunday at 9pm, André Villas-Boas' men will be in Lille, who are fourth with 40 points.

Four days before their game against Nîmes, OM players were at training Monday 24th, in the morning. 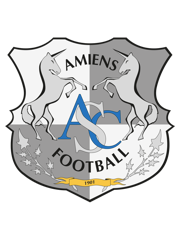